Growing up on a farm in Louisville, Georgia I had the opportunity to experience the outdoors at an early age.  I caught my first fish when I was three, went on my first dove hunt when I was eight, shot my first deer when I was twelve and killed my first wild turkey when I was fourteen.  Ever since that first gobbler, I have been addicted to being the best turkey caller I can.

My Granddaddy, Lonnie Davis, took me to the Turkeyrama in Perry, Georgia when I was sixteen. There we watched the Realtree Grand American turkey calling contest, and I enjoyed every minute of it. At that point I had been calling on a mouth call for three years. I told my Granddaddy, “I think I can call as well, if not better, than a lot of these guys in the contest.”  I went home and practiced for the next few years until I was old enough to call in the contest.

I quickly found out that I was not as good as I thought – but I didn’t give up, and  kept on competing.  I would ask other turkey callers which calls they were using and 90% of them would say they built their own.  That’s when I knew I had to try building calls for myself.

I started out with a M.A.D. call maker and then converted to one I designed myself.  Over the next 12 years of competing, my calling improved and so did my turkey calling ability.  I won several contests, but my biggest achievement was the 2003 U.S. Open – I was a very happy man that day! What made it so special was that I won using the calls I made.

I still make my own mouth calls and enjoy every minute of turkey hunting.  My experiences in competing led me to start Lost Lake Custom Calls. Lost Lake Custom Calls provides hunters with high quality calls, the same designs that I use in the woods. I also wanted to give hunters the ability to design their own custom mouth call. 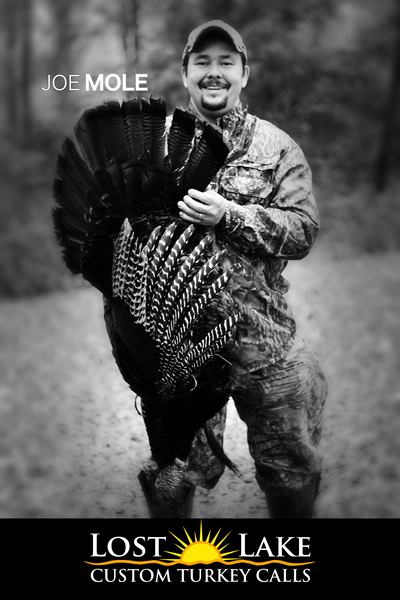